About Interoil Exploration and Production ASA

Interoil / About us / Operations

Interoil’s portfolio of oil and gas properties provides a stable production and cash-flow giving the company a secure platform for future growth.

Interoil’s current operations are all related to assets in Colombia and Argentina.

In Colombia Interoil has two production licenses, Puli-C and Altair, plus an exploration contract in LLA-47 – an onshore block placed in the prolific Llanos Basin.

The LLA-47 exploration block covers an area of 447 km² where Interoil acquired 350 km² of 3D seismic and has identified several hydrocarbon prospects. The Company has combined phases 1 and 2 under the license agreement and have a commitment to drill 10 wells before 7 February 2021.

The “Vikingo” well was the first well drilled in the LLA-47 block. Vikingo turned out to be a discovery and has been producing well since opened. The Vikingo well also brought a lot of hard geology data that when integrated with the existing interpretation showed inconsistencies that call for a reprocessing of the existing 3D seismic acquisition field data. Further drilling has been postponed until the reprocessing and new interpretation has been concluded.

In Argentina Interoil has equity interests in one exploration and seven production concessions in the highly prolific Golfo San Jorge Basin, in the Jujuy Province and in the heart of the Austral Basin in southern Argentina. As of January 2020, the recoverable conventional reserves in these licenses are estimated to exceed fourteen million barrels of oil equivalents, and they also have a significant potential for unconventional oil.

The Mata Magallanes Oeste (production) and Cañadón Ramírez (exploration) are adjacent blocks, covering nearly 380 square kilometers in the western part of the highly productive Golfo San Jorge Basin in the southern part of Argentina. This basin is said to hold approximately half of Argentina’s gas reserves and twenty per cent of the country’s oil reserves. Interoil will become the operator and hold an 80 percent working interest in these licenses in a joint venture with Selva Maria Oil SA and Petrominera SE, the state-owned company of the Chubut Province where the blocks are located. 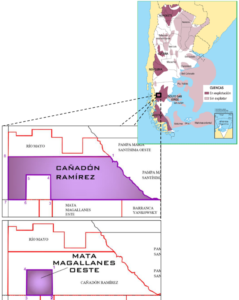 The La Brea block (production) covers 112 square kilometers in the Jujuy Province in the Northern Argentina, and comprises two promising structures, La Brea Este and El Oculto. Interoil will also become the operator and hold 80 percent working interest in a joint venture with Selva Maria Oil SA and JEMSE, the state-owned company of the Province of Jujuy. 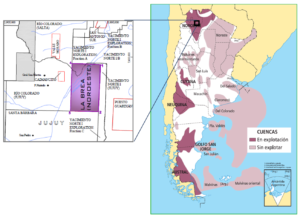 Interoil Exploration and Production holds an 8.34 percent working interest in four producing exploitation concessions contracts in the heart of the Argentine Austral Basin. Geographically the basin lies within Santa Cruz province in the Southern mainland part of Argentina: 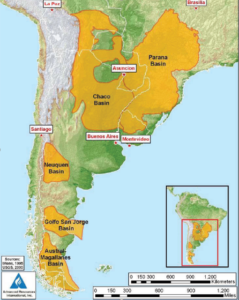 These concessions (Chorillos, Campo Bremen, Ocèano and Moy Aike) consist of 13 producing fields with 42 oil wells and 30 gas wells. In addition, a fifth concession, the Palermo Aike area, is not producing and has a development program in the process of evaluation. Selva Maria Oil is the operator for the concessions until Interoil has been granted the operator lisence from the Argentine government. 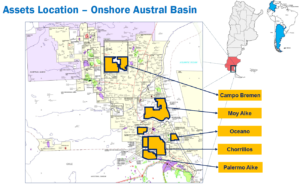 Altogether the concessions cover an area of more than half a million acres, of which over 50,000 acres are considered exploitation areas with contract periods running through April 2026 (Oceano until August 2026). They were discovered and developed by YPF approximately 45 years ago.

The Santa Cruz assets have their hydrocarbon production coming from the Springhill formation with some wells also flowing from Tobifera. The total operated production of these concessions amounts to around 3,000 boepd (25 % is oil) and 2P reserves to exceed 6 million barrels of oil equivalents (Mmboe), with significant exploration potential upside.